We’ve been following the development of Microsoft’s new Chromium-based Edge browser ever since we first learned it was on the way. We know you’ll be able to use all your favorite Chrome plugins on the new browser as well as all your Edge plugins, too. We’ve even seen screenshots so we already know what it looks like. Today, we’re here to tell you that the journey is nearly complete as Microsoft is releasing the first preview builds of its brand new browser.

In December, Microsoft announced it was working on a new Chromium-based version of Microsoft Edge. The software giant pledges to have the first builds of the browser available in “early 2019” and now seems to be coming good on that promise.

Microsoft has now confirmed that Windows 10 users on 64-bit machines can download an English language version of the Microsoft Edge Insider Dev Channel and Canary Channel. If you follow our Google Chrome update articles, you’ll notice that Microsoft is calling the most experimental version of the new Edge browser Canary, just like Google does with Chrome.

The Canary Channel will show all the latest features that the Edge team have been working on. It will be updated on a daily basis, but may well end up containing buggy code that could cause issues on your machine. The Dev Channel will be updated every week and so will keep users up to date on what new features will coming to the Edge browser, while being a little more stable than the Canary Channel.

You’ll notice from the image above that both of these channels come before the Beta Channel in the development process. The beta version of apps is the final testing phase in the development process, when users get to test out new features. The Beta Channel will be updated every six weeks. These new builds are more of a way of mapping out what the new Edge browser will be like. They’re not browsers you should be downloading so you can start surfing the web.

How to test beta versions of apps

To be fair to Microsoft, it is clear that although it is building a browser using Chromium, it is determined to build something that can stand on its own two feet in the battle against Google Chrome. In an online PowerPoint presentation, a Microsoft Edge engineer included a slide that showed just how many Chrome features Microsoft has removed or replaced to make the new Edge what it is today. 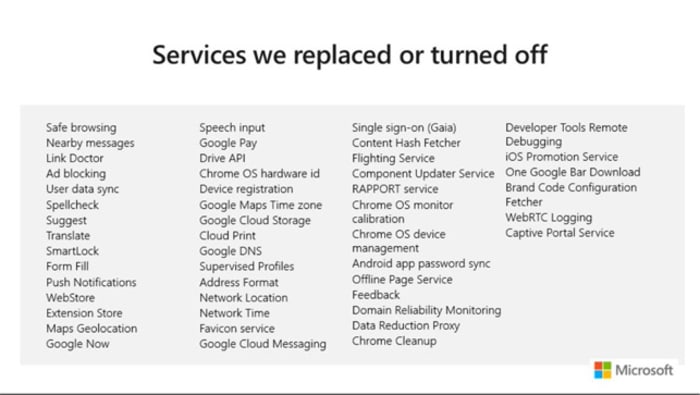 This is all the stuff that independent developers won’t have the resources to build themselves. Microsoft does have the resources and wants it known that it has rebuilt the new Edge itself. The move to Chromium is more about better web compatibility for users, less fragmentation for developers, and an improved update cycle.

If you’re a developer, you can now get your hands on the early access version of the new Edge browser by checking out the Microsoft Edge Insider program. For the rest of us, there is still no news from Microsoft about when we’ll see a general roll-out of the new browser.

From the timetable Microsoft has laid out, we could expect to see a beta version in five-to-six weeks and then it is anyone’s guess how long it’ll take for a full version to come out after that. All the news about the development process has been positive so far though, and it really looks as though Chrome could soon have some serious competition at last.

Better than chrome? See what other browsersoffer