We know. We were excited too. But at this point it’s not even a choice; Microsoft has completely removed October’s Windows 10 update from their download site. RIP app mirroring, cloud clipboard, and enhanced screenshot tools. We’ll see you when Microsoft gets its act together. 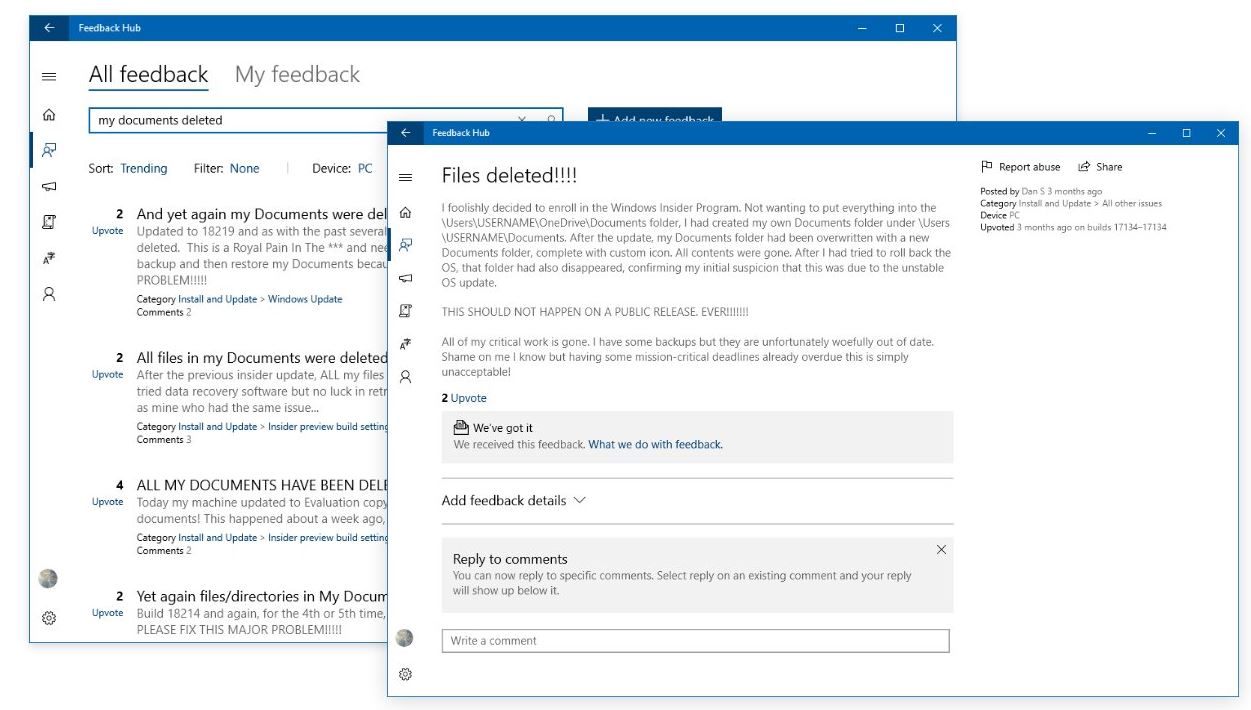 So what exactly is happening? In short, this update could literally delete your files. Without warning. As far as bugs go that’s pretty serious. While we can forgive the occasional glitch in the system – maybe we can even forgive this egregious error – it reeks of corporate greed and a lack of attention to detail when it turns out Microsoft was aware of the problem months ago and put out the update anyway:

Sampling of Feedback Hub reports of data deletion from as early as 3 months ago pic.twitter.com/xlfsuEbh1d

That seems pretty irresponsible. So just how is it that a company as huge as Microsoft could let such a deadly bug slip through the net? It’s because “these issues aren’t widespread,” reports Senior tech news editor Mehedi Hassan. “Most of these reports from Insiders had low levels of upvotes, ranging from 3-10. That means Microsoft likely never even noticed them.”

That’s right. This glitch may have been left unexplored because Insider’s bug reporting system didn’t make it out to be important.

Now Microsoft is recommending that any users who have downloaded the update to not install it and to “wait until new media is available.” Microsoft believes the bug stems from an issue the update has with Intel® Display Audio Driver versions 10.25.0.3 through 10.25.0.8, and requires specific actions before updating. If you’re among the few Windows 10 users who download updates but don’t install them right away, then this is your lucky day. Don’t install it yet and you should be fine.

If you were so unfortunate as to download and install the update early, Microsoft’s best solution is … to call the company help line.

#WindowsInsiders If you’ve run into the “missing files after update” issue for 1809/October 2018 Fall update, please call our support line. They have the tools to get you back to a good state. This build is no longer available to download manually: https://t.co/Ce9WVILknp pic.twitter.com/fvisQi1c8g

Despite this mess, we’re still completely convinced that it remains a good idea for Microsoft to allow anyone to test Windows 10; that’s allegedly how we find these problems and eliminate them before updates are released. If Microsoft isn’t going to listen to the feedback it gets, though, and bug reports don’t get addressed simply because their priority number on Insider wasn’t high enough … what even was the point?

There are undoubtedly some outstanding issues with the software quality Windows is putting out, and this isn’t the first time an update has broken Windows 10. It’ll take some work to get Microsoft’s users back in their good graces, and frankly, that’s the sole good thing to come out of this debauchery.

With this new backlash, Microsoft is put in an awkward position to begin enforcing their looming monthly charge policy. People might be less apt to continue paying for a product if it’s going to get steadily worse over time, and we certainly won’t pay a monthly fee for Microsoft to delete our files. Stay tuned as we follow this saga’s development.

What is Windows 10 Ultimate Performance mode?